Objective
This document is continuation of the below document.
DUAL ISP REDUNDANCY USING STATIC ROUTES PATH MONITORING FEATURE, FOR TRAFFIC FAILOVER
After setting up DUAL ISP redundancy based on static route path monitoring, this document explains how to setup Site to Site VPN tunnels (IKEv1 and IKEv2) per ISP for redundancy of traffic over the tunnels.

Note : If Dual ISP redundancy is configured using multiple Virtual Routers and PBF, then this document does not apply.
For use of Multiple VRs for Dual ISP and VPN tunnel redundancy refer the below link.
HOW TO CONFIGURE A PALO ALTO NETWORKS FIREWALL WITH DUAL ISPS AND AUTOMATIC VPN FAILOVER

Assumptions :
Dual ISP using Static route path monitoring is already configured.
PS Firewall A is running PANOS version 8.0 or above.
ISP1 is the Primary ISP and ISP2 is the secondary ISP.

Since both Tunnel interfaces are configured under the same Security zone "L3-VPN", a single security policy from Trust zone to L3-VPN zone should be enough to allow traffic on both the tunnels.

However, if the peer side is a different vendor, then an IP address to monitor over the site to site tunnel will have to be identified to be used on both the methods.
This monitoring traffic will be encrypted over the tunnel.
The IP address used on the tunnel interface on PA and the destination IP that is monitored will have to be covered by the Local and Remote subnet respectively if Proxy ID configuration is used.

There are two methods to do VPN tunnel traffic automatic failover. Any one of the below methods can be used.
1. Failover using Tunnel Monitoring
2. Failover using Static Route Path monitoring

In case of "Failover using Tunnel Monitoring", by default PA firewall will forward Ping packets to monitored Destination IP over all the Phase 2 tunnels if multiple proxy-ids are configured.
This will cause the Tunnel monitoring to fail if the Peer side is unable to send back the replies on all the Phase 2 Tunnels.
To make sure the Tunnel Monitoring traffic is only sent over the Proxy-ID which covers its IPs, refer the below document.
TUNNEL MONITORING FOR VPN BETWEEN PALO ALTO NETWORKS FIREWALLS AND CISCO ASA

Once the Traffic through the Primary Tunnel recovers, the tunnel monitoring will come up and the route through tunnel.1 will be installed in the Forwarding table.

Path monitoring on the Primary VPN route is configured to monitor the remote side tunnel IP 10.10.10.2 sourcing from tunnel.1 interface IP 10.10.10.1. 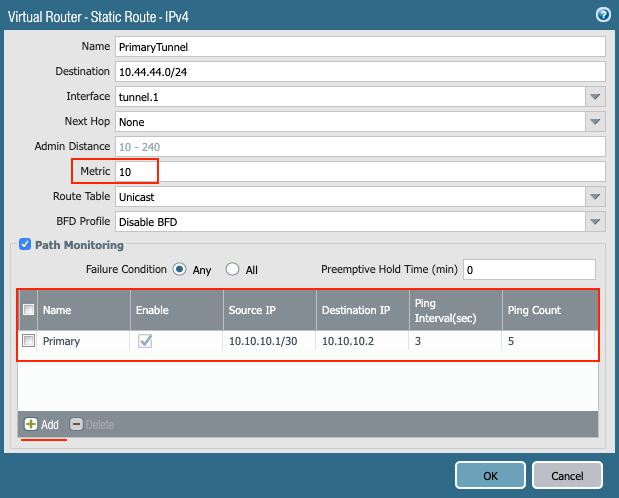 Note : The "Preemptive Hold Time" has been set to 0 so that the route through tunnel 1 recovers as soon as the Primary VPN comes back up.
The Path monitor will send Ping packets to the specified destination which will be encrypted over the site to site tunnel.
Once the VPN tunnel goes down or if traffic over the tunnel is not going through; the path monitoring would fail.
Static Route monitoring will show that the route through the Primary VPN tunnel tunnel.1 as down.
Network > Virtual routers > Click on "More Runtime Stats" for default > Static Route Monitoring

This primary route will then be removed from the Forwarding table and the Secondary Tunnel route over tunnel.2 with metric 20 will take over.
Network > Virtual routers > Click on "More Runtime Stats" for default > Forwarding Table
This can also be checked under
Network > IPSec Tunnels > "Show Routes"

The failure and recovery of the Static route path monitoring will generate system logs as below.
Monitor > Logs > System