There is a limit on the maximum number of Proxy IDs per Phase 2.

To implement VPNs with more than 10 Proxy IDs, configure another tunnel with the same Phase 1 and second Phase 2.

To configure the first VPN:

To configure the IKE Phase 2 VPN, go to Network > IPSec Tunnels. Create a new VPN with the following parameters:

Next, build your Proxy IDs. Remember the limit is 10:

When creating your second IPSec tunnel, you can refer to the same IKE Gateway. Remember to use a different tunnel interface (in this example, tunnel.3):

You cannot duplicate the Proxy IDs from the first tunnel. They must have at least one element that's different. You can use different Local Proxies in your list of 10. 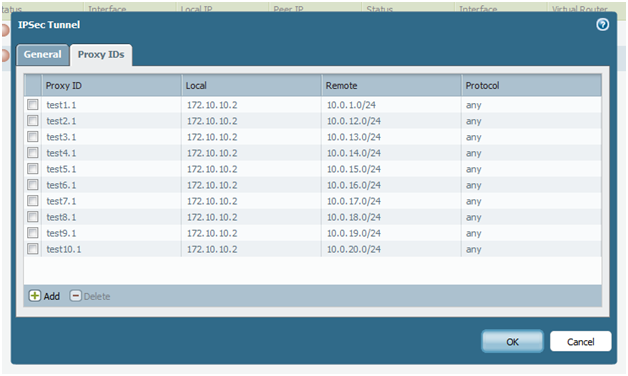 Note: From PAN-OS 5.0, the Proxy ID limitation has been increased to 250 except on the Palo Alto Networks PA-200, which has a limit of 25 Proxy IDs. Throughput on tunnels with 250 proxy IDs configured is similar to tunnels with only one configured. Each Proxy ID counts towards the platform limit for VPN tunnels.