This document describe the fundamentals of security policies on the Palo Alto Networks firewall.

All traffic traversing the dataplane of the Palo Alto Networks firewall is matched against a security policy. This doesn't include traffic originating from the management interface of the firewall, because, by default, this traffic does not pass through the dataplane of the firewall. Security policies on the firewall can be defined using various criteria such as zones, applications, IP addresses, ports, users, and HIP profiles. Firewall administrators can define security policies to allow or deny traffic, starting with the zone as a wide criterion, then fine-tuning policies with more granular options such as ports, applications, and HIP profiles.

The firewall has two kinds of security policies:

By default, the firewall implicitly allows intra-zone (origination and destination in the same zone) traffic and implicitly denies inter-zone (between different zones) traffic. Traffic allowed or denied by implicit policies are not logged on the firewall by default, so no logs can be found for this traffic. To be logged by the firewall, the traffic has to match an explicitly configured security policy on the firewall. However, for troubleshooting purposes, the default behavior can be changed. Refer to: How to See Traffic from Default Security Policies in Traffic Logs.

A session consists of two flows. The Client to Server flow (c2s flow) and the Server to Client flow (s2c flow). The endpoint where traffic initiates is always the Client, and the endpoint where traffic is destined is the Server. For defining security policies, only the c2s flow direction needs to be considered. Define policies that allow or deny traffic from the originating zone to the destination zone, that is, in the c2s direction. The return flow, s2c, doesn't require a new rule. The security policy evaluation on the firewall occurs sequentially from top to bottom in the list, so traffic matching the first closest rule in the list applies to the session.

Here's an example of how to identify flows in a session from the CLI:

In this document, the following topology applies to use cases of security policies: 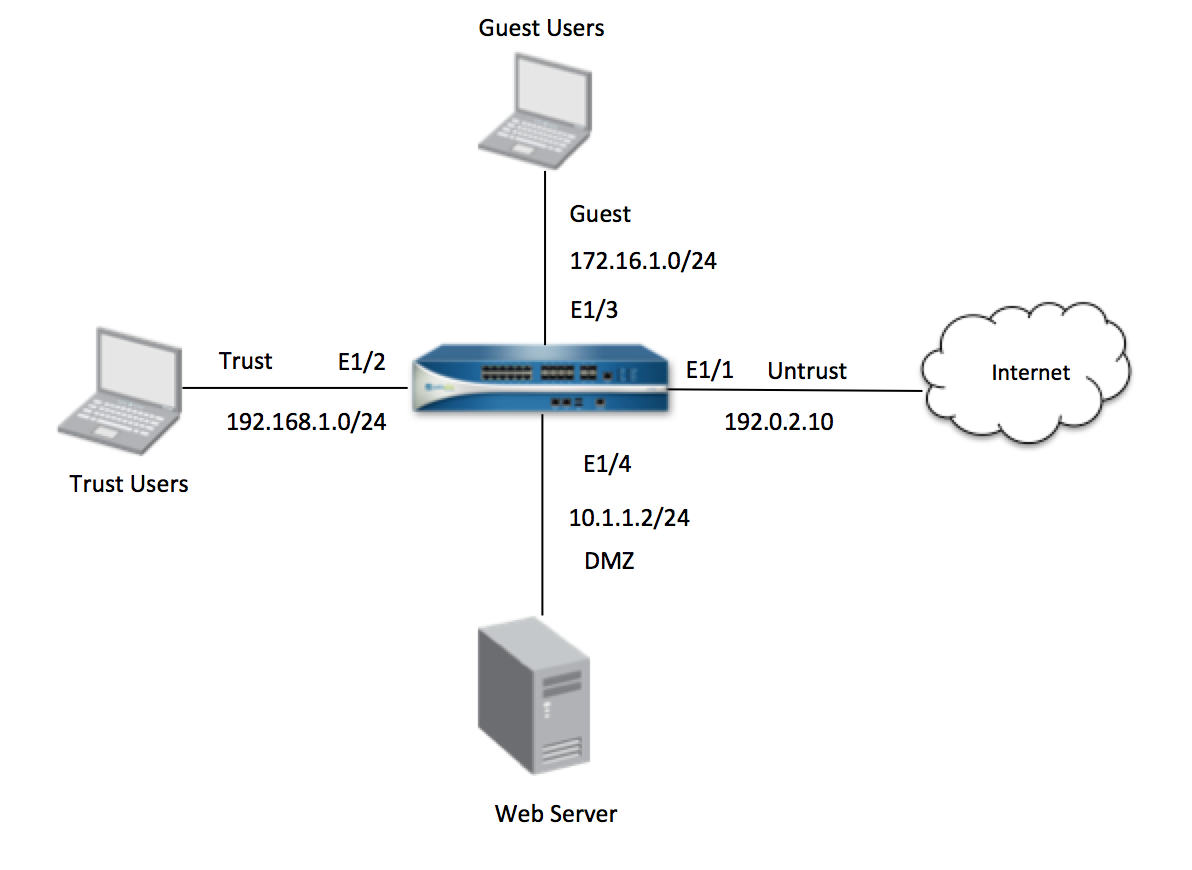 In the example below, security policies allow and deny traffic matching the following criteria.

The Service column in the security policies defines the source and destination ports where traffic should be allowed. The four options are:

The example shows rules that are created to match the above criteria.

When committing the above configuration changes, the following shadow warnings are displayed: 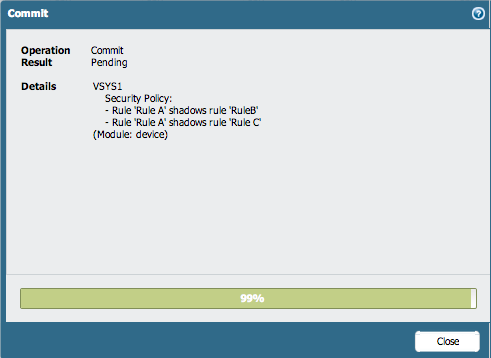 The impact of shadow warnings and tips for avoiding them are discussed next.

In the above example, the IP address 192.168.1.3 belongs to the Trust zone and falls in subnet 192.168.1.0/24. Since the firewall does a security policy lookup from top to bottom, all traffic from IP 192.168.1.3 matches Rule A and will be applied to the session. Although the traffic also satisfies the criteria of Rule B and Rule C, these rules will not be applied to this traffic because Rule A is shadowing Rule B and Rule C.

To avoid the impact of shadowing, Rule B and Rule C should precede Rule A, as shown below. Now the traffic matches against the correct rules and prevents "shadow warnings" during the commit.

Security policies based on users

In the above example, policies are written based on IP addresses.  In the same way, LDAP users, LDAP groups, and locally-defined users on the firewalls can also be used in the security policies. Refer to the following documents for more details on how to configure User-ID and add the users to the security policies:

The rules below show the configuration to satisfy the above criteria.

All traffic destined to the Web Server from the Untrust zone will have a destination public IP of 192.0.2.1, which belongs to the Untrust zone. Since the traffic is originating from the Untrust Zone and destined to an IP in the Untrust Zone, this traffic is allowed by an implicit rule that allows same zone traffic. After security policy lookup, the firewall does a NAT policy lookup and determines that the public IP of the Web Server should get translated into private IP 10.1.1.2, located in DMZ zone. At this stage, the firewall has the final destination zone (DMZ), but the actual translation of the IP from 192.0.2.1 to 10.1.1.2 doesn't happen yet. After determining the information of the final destination zone for the post NAT traffic, the firewall does a second security policy lookup to find a policy that allows traffic destined to the final destination zone, DMZ. Thus, Rule X above is configured to allow post NAT traffic. Note that Rule X has DMZ (Post-NAT zone) as the destination zone and the 192.0.2.1 (Pre-NAT IP) as the destination IP address. In the above example, a service "Web-server_Ports" is configured to allow destination port 25, 443, and 8080. For more information, refer to: How to Configure a Policy to Use a Range of Ports.

This section discusses "application dependency" and describes what happens to the session when the application-id changes in the middle of a session.

The example shows the rules that are created to match the above criteria.

While committing the configuration changes, the following application dependency warnings may be viewed.

In the above example, a new security policy, "Dependency Apps rule," is created to allow the SSL and web-browsing. Youtube traffic initially matches this rule and once the application shift happens, a second security policy lookup is matches against Rule 10.

Websites like Vimeo use the URL name of the website as a common name and thus does not need SSL decryption to be configured. Some websites like YouTube use a certificate with wildcard name as the common name. In YouTube's case, it is *.google.com. So using this information for application identification is not possible, and SSL decryption must be configured to get visibility into the URL of the website. Refer to the following document on How to Implement and Test SSL Decryption

How to See Traffic from Default Security Policies in Traffic Logs

The following criteria is checked by the firewall in the same order to match the traffic against a security policy.

In the above configuration example, when application "web-browsing" on TCP port 80 from the Trust zone to the Untrust zone passes through the firewall, a security lookup is done in the following way:

The optimal way of configuring security policies is to minimize the use of "any" and be specific with the values, when possible. This reduces unnecessary security policy lookups performed by the Palo Alto Networks device.

Is there a Limit to the Number of Security Profiles and Policies per Device?

How to Identify Unused Policies on a Palo Alto Networks Device

How to Test Which Security Policy will Apply to a Traffic Flow.

Why are Rules Denying Applications Allowing Some Packets?

Why Does "Not-applicable" Appear in Traffic Logs?

How to Identify Unused Policies on a Palo Alto Networks Device