To enforce URL filtering policy on TLS handshakes for decrypted HTTPS sessions, we suggest you use any one of the following workarounds:
We do not recommend disabling SSL/TLS Decryption because it will expose you to much higher risks.

Details of the suggested workaround (2)
The concept of this workaround is to emulate the second cybersecurity device within PanOS NGFW to implement both “Decrypt” and “No Decrypt” security policy rules to the same part of traffic. The implementation workflow is described below, however based on your configuration, some alterations might be required.

ATTENTION: The described configuration may significantly increase the Firewall load due to doubling the number of active SSL sessions and web-browsing traffic. Consider implementing it to the sensitive data segments only or using PBF (Policy Based Forwarding) to restrict what traffic should be inspected twice.

The following steps are supposed to help you build configuration on your firewall that represents the principle diagram on the scheme below. The following table represents Network Interfaces configuration. The traffic from Inside security zone should pass through Internal DMZ and External DMZ zones, routed by two separated Virtual Routers before it reaches the Internet zone. That allows you to implement a different sets of security rules on each of the traffic path sections (Inside - Internal DMZ and External DMZ - Internet). 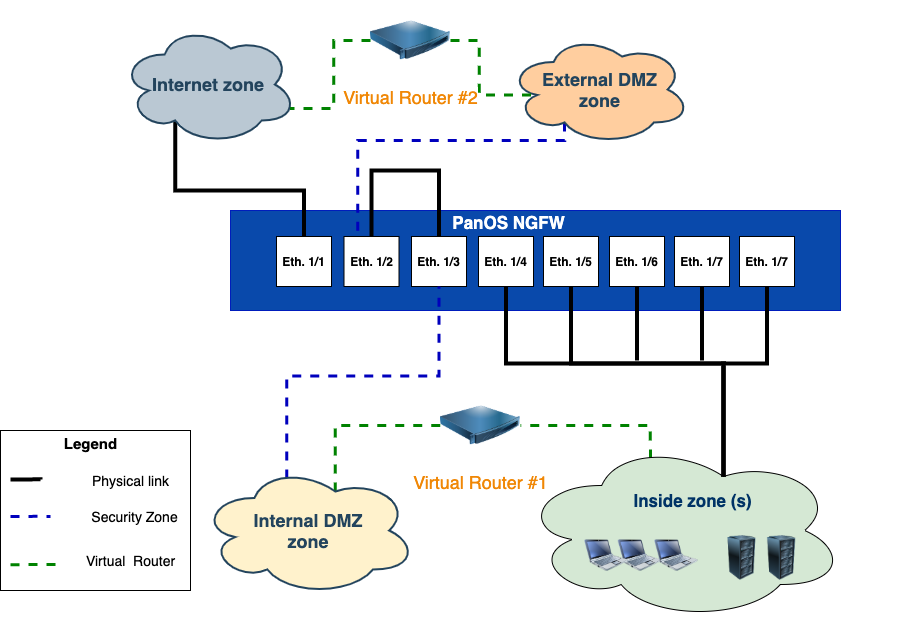