In the week of August 29th, 2016 Palo Alto Networks released changes to App-ID for Microsoft® Office 365™. To allow our customers to prepare for this change and avoid any problems, Palo Alto Networks is releasing the following placeholder App-IDs and decode contexts as part of Application and Threat Update version 597. To ensure that existing Office 365 policies continue to work after the week of August 29th, 2016 we strongly encourage customers to read and fully understand this document.

New Applications (only placeholders for now):

Q. Why is Palo Alto Networks making this change?

A. Currently, to safely enable Office 365, our customers use the “ms-office365” and  “ms-onedrive” App-IDs. However, we have found that customers would also like to accomplish the following goals :

Q. What new capabilities do I get because of this change?

A. Customers will get the following new capabilities because of this change:

Q. Do I need to enable SSL-decryption to use this capability?

A. Yes, SSL decryption is required to have this capability.

Q. Am I affected by this change if I am not using SSL decryption for Office 365 traffic?

A. No, this change will not affect you if you are not using SSL decryption for Office 365 traffic.

Q. Am I affected by this change if a device upstream is performing SSL decryption and the firewall only gets decrypted traffic.

A. In this case, yes you will be affected by this change and you should make the changes suggested below.

Q. How can I create “Custom Application” for my specific instance of the Office365 account?

A. Step 1. Under Objects > Applications – click “Add” and configure the values as shown below. 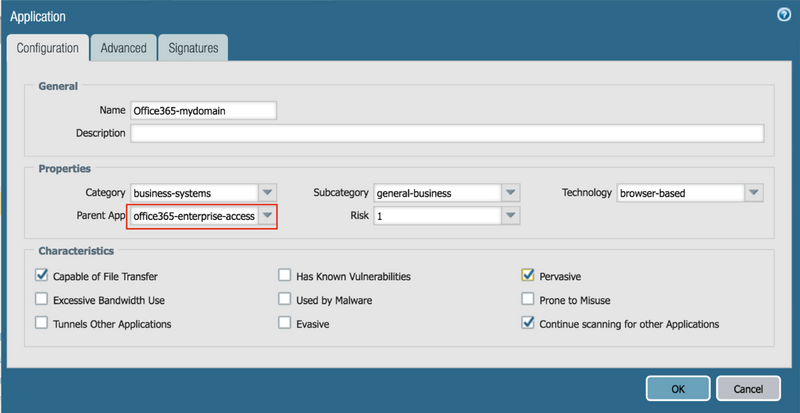 Step 2. Click the “Signatures” tab and configure the values as shown below. 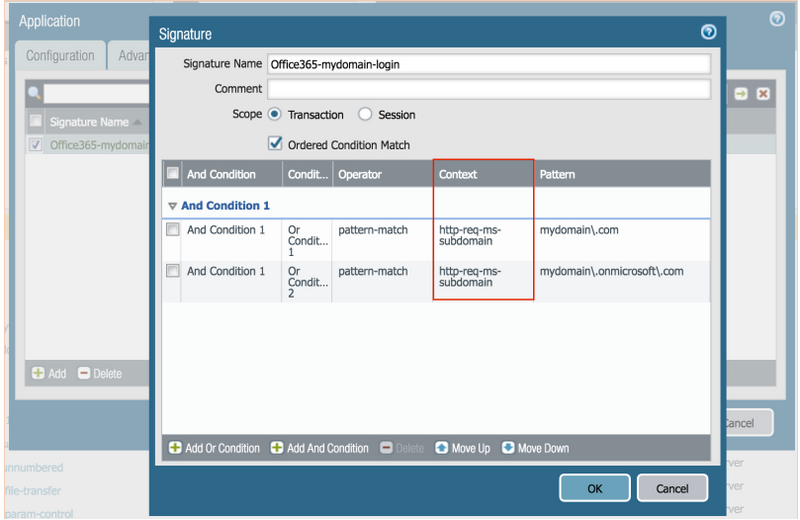 Q. How am I affected by this change? How do I guarantee operational continuity for safely enabling Office 365 Apps?

A. As of July 6th, 2016 with Content version 597, Palo Alto Networks is adding “office365-enterprise-access” and “office365-consumer-access” as placeholder App-IDs to our application catalog. These App-IDs are delivered as placeholders, thereby allowing our customers to make necessary policy changes to their firewalls ahead of time. These two placeholder App-IDs will not affect firewall policy processing, or any existing App-ID driven rules until the week of August 29th, 2016 when they are functionally enabled.

Palo Alto Networks will replace the placeholder App-ID with the formal App-IDs “office365-enterprise-access” and “office365-consumer-access” in the week of August 29th, 2016.

To facilitate this transition, Palo Alto Networks intends to follow the timeline outlined below:

Q. What happens if I do not add “office365-enterprise-access” or  a custom App-ID created for enterprise logins to Office 365?

A. If “office365-enterprise-access” or an enterprise specific custom App-ID is not allowed, Office365 services will not work. We strongly recommend customers to incorporate the changes described above to prepare for the update we intend to deliver during the week of August 29th, 2016.

Q. What happens if I do not add “office365-consumer-access” App-IDs to my policies?

A. Without “office365-consumer-access” explicitly allowed, users will not be able to access the consumer edition of Office 365 services. We strongly recommend customers to incorporate the changes described above to prepare for the update we intend to deliver during the week of August 29th, 2016.

Q. How will this change affect the existing “ms-office365” and “ms-onedrive” App-IDs?

A. The existing App-IDs will continue to work until August 28th, 2016. But with the content update of the week of August 29th, 2016, a part of traffic related to user login will be identified as “office365-enterprise-access” or “office365-consumer-access” for all ms-office365 App-IDs. This means that these App-IDs should exist in the security policies as per the recommendations made above.

Q. What versions of PAN-OS will be affected by this change?

A. All currently supported versions of PAN-OS software that are updated to a version of Content and Threat Update delivered on or beyond the week of August 29th, 2016 may be affected by this change.

Q. I have made the changes suggested above but I do not see the new App-IDs or the custom App-ID being triggered.

Send comments to @msandhu or @nasingh or leave a comment or question in the comments section below.