The Palo Alto firewall is configured with two interfaces (Untrust and Web-untrust) connected to the same VLAN on a DMZ switch (running VRRP) and bi-directional static NAT's are configured from Trust to Untrust zones. Whenever the firewall is rebooted, the Palo Alto Networks ARPs for some of the NAT addresses using the Web-Untrust MAC address, despite NAT rules that specify Trust to Untrust.  Removing the bi-directional flag and manually creating the inbound portion of the  NAT rule from Trust to Untrust resolves the problem. 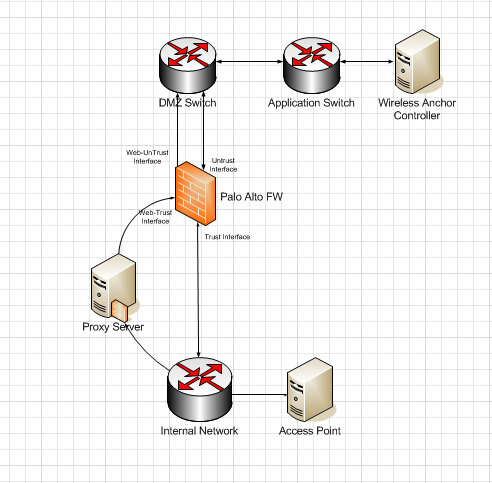 Bi-directional NAT rules were created to simplify the configuration of NAT rules for servers that must be able to initiate outbound sessions (where the source address is translated  and also respond to inbound sessions (where the destination address is translated on incoming packets). For inbound sessions,  bi-directional NAT rules must be able to match connections coming in from internal OR external zones. This requirement stems from the fact that many companies utilize a single DNS entry for services provided to internal users and external users. Because of this requirement, the bi-directional NAT rule will create a static source NAT rule that exactly contains the match criteria specified in the NAT rule (for outbound sessions). It will also create a NAT rule (one that is not shown in the config) to handle destination NAT (for inbound sessions). This rule uses a source zone of 'ANY' so that traffic from internal users (internal zone) and traffic from external users (external zone) will match the NAT rule and may therefore utilize the services offered by that server.